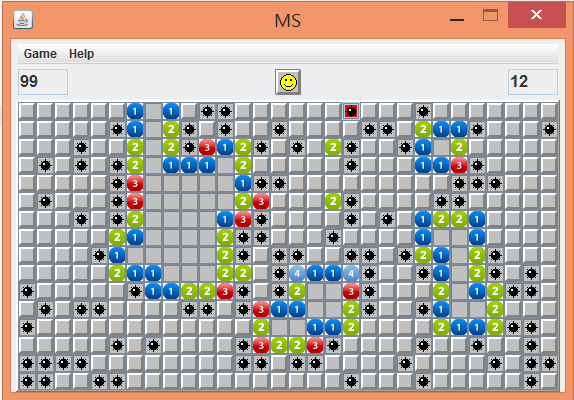 We may think each cell as a UI structure (e.g. button), which has following attributes:
So, we have a two dimensional "Button[][] cells" data structure to handle game actions.

Note2: It's recommended to handle mouse clicks with "mouse release" actions instead of "mouse pressed/click" actions, otherwise left or right click may be understood as multi-clicks or vice versa.

Note: Last step may be implemented with recursive call or using a stack data structure.

Do not commit halfdone work
Each commit should consist of a complete task (issue, bugfix, etc.). Partial commits may cause unfunctionality, crash of application or even compilation errors.

For having no trouble, a stable version controlling process should be applied. According to this process, you should full update the code, then build and run your application. If application runs correctly, you should commit all of your updated files. While committing, inspect all of your changed files and changes. If all team members apply this process, application will always continue to run and no one will prevent others work.


Commit atomicity/granularity
Do not use version controlling system to backup each single file separately and do not commit hundreds of files after days or weeks of development. Commits should be atomic, and as a best practice, should include files which are related with only one task. Late commits also brings more conflicts.


Don't commit generated files
Use "ignore" funcionalities of your version controlling tool to ignore commiting and updating of generated files (e.g. target folders, user settings, IDE generated files, generated classes after each build etc.) By doing this, you will not waste your time for managing those unstable/unimportant files.

Continuous integration
Use continuous integration along with version controlling. By doing that, perform automated builds and deploys to a specific location. Also, configure the tool to create a separate version number (with a predefined versioning algorithm, e.g. <major_changes>.<minor_changes>.<bug_fixes>) for each build. This will be useful to trace tests and deployments.

Use qualified version controlling tools and plugins (especially for merge)
Version controlling tool quality is also important. It must at least show changed files clearly, give ability to merge conflicted files easily and view old versions of files. Besides, it will be better to have a branching function to manage versions and and issue tracking system synchronization to manage issue-related code file matchings.

Use branches for testing and different lines of code
You should use different code branches for development, testing and also production. If a version of code is being tested, development should not continue on that branch. Development can continue on another branch and when a new version will be tested after fixing some bugs and adding new properties, a new test branch should be provided with a new version. When a stable test branch is reached, it may be released as a production branch.


You can also take a look at the below link for version controlling basics:
http://betterexplained.com/articles/a-visual-guide-to-version-control/

Definition:
Sometimes our software projects need costly object creations (database connections, socket connections, large graphical objects etc.). This cost may be about time and/or memory. Those objects may also be needed to be created frequently. At that moment, Object/Resource Pool pattern comes to help.

Client requests an object (Reusable) from object pool. Object pool has a list of predefined reusables and gives an available one from pool. For the client's point of view, given reusable is a new object but it is probably (object creation strategies will be told later) a pre-created object with a new object's field values. For the optimum performance, client should notify object pool when reusable is no longer needed. Just in case client doesn't notify, object pool may define a timeout for each created reusable. Object pool must also have a synchronization mechanism for reusable serving, especially on multithreaded or multiuser applications.

According to the project requirements, some of those strategies or mixed versions should be selected and implemented for object pool. But "reusing available objects" principle is the key and can not be changed for any implementation strategy.