Swiss Army Knife Interface is an interface class which has excessive number of method definitions. Architect/designer may design this interface to use for every need of the software, but this is a wrong approach and an antipattern. More than one interface must be designed using some design approaches. 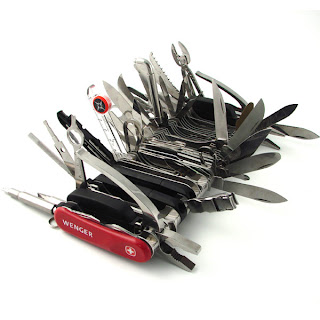 The answer is hidden in the OOP SOLID rules. Single Responsibility ("S") rule of SOLID says that "every object should have a single responsibility", and Interface Segregation ("I") rule of SOLID says that "different types of functionalities should be placed in different interfaces". If an interface have more than one types of functionalities or defines more than one responsibilities, implemening that interface is meaningless because implementer class will not suit SOLID rules by implementing that interface.

More than one Swiss Army Knife Interface may also exist in a software. This means more than one problem exist and must be solved.

For another viewpoint, you can take a look at our another post about interface segregation principle:
http://codebuild.blogspot.com/2010/09/oop-solid-rules-interface-segregation.html